A quick run on the schedule this morning. I feel like that’s Hal’s way of looking out for me in a fast-approaching winter. Can it snow in the desert? Perhaps I should save the dramatics until it’s actually cold! Anyhoo, the run:

Nothing to see here folks. The pace was a bit better, which I assume it should be in a shorter run? Hint: not a rhetorical question, I dunno what I’m doing!

I’m actually enjoying this running thang. Who knew?! The famed Runners High might just be a thing after all. I feel fantastic that I’m starting my days in such a positive way. It makes it much easier to make good choices throughout the remainder of the day.

Speaking of choices, I’ve ummed and ahhed about weighing in here, and finally decided that there’s no harm right? YOLO and all that.

So today, I’m 73 kilos. I’m 157cm tall (ahhh..tall is probs not the right expression) so it’s definitely in the overweight range. This I know.

But this week, I started something to turn that all around.

In an effort to justify the blog title ‘I’m running aren’t I?’, I have officially taken the plunge and signed up for a 12km race in August.

So I found the Hal Higdon 10k novice training plan and I kicked off week one today: 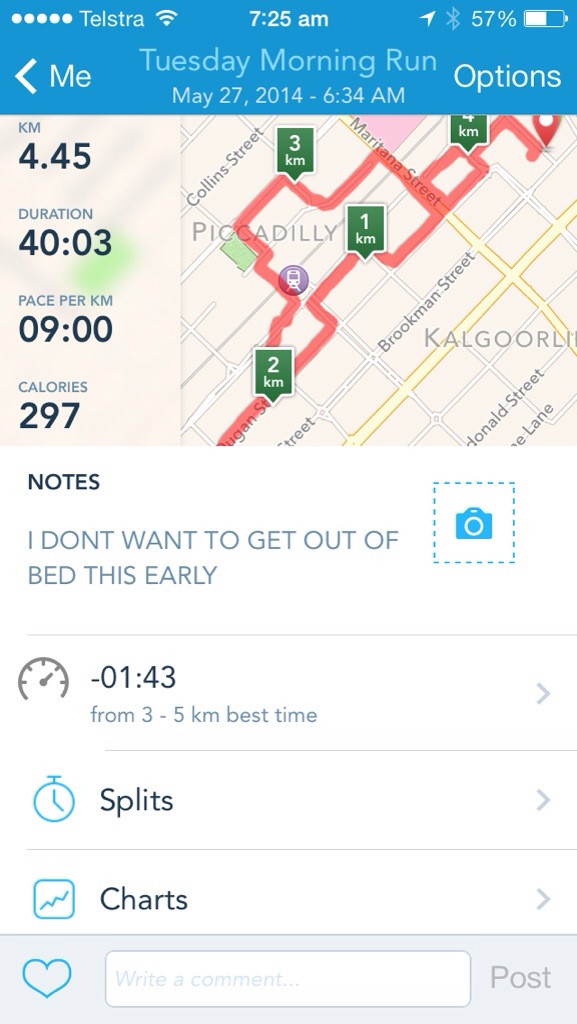 I believe I was meant to do that run in 25 minutes. Ahhh…fail. It appears I won’t be making any speed records at the 12km run in August. It was right about then that I realised that I might just be biting off a little more than I can chew. Is there any chance I can finish 12km? Probably. Is there any chance I’ll run the whole 12km? I doubt it. Is it worth worrying about times and all that technical stuff just yet? I have no freakin’ idea!

See, I live in a reasonably small town and there aren’t too many race options throughout the year. In fact, the race I’ve signed up for is the inaugural marathon/half marathon/12k race in town (exciting!). I don’t really have the option of doing a 5k and building up to 10k, then 12k and so on. I figure I’ll just do the best I can, run as much as possible, walk when I need to, and aim just to finish. If that goes well, perhaps I can look at travelling to races- not an easy feat when the city is 6 hours away! But let’s not get ahead of ourselves…

Here’s the problems with running that have arisen so far, in no particular order:
1. I have to get up earrrrrrrly. When Mr L (that gorgeous little son of mine) wakes me at 5am to advise that the tooth fairy did in fact come last night, and I then have to re-get to sleep and get up again at 6..meh.
2. It’s fast becoming wintery in the ol Southern Hemisphere. Translation: it’s getting chilly. I picked a good time to kick off this little goal of mine! In saying that, summer is 40+ degrees in my neck of the woods (desert y’all!) so it’s probably never a great time.
3. Everything I read about running is in miles. No biggie, online conversion is a wonderful thing that we are blessed with. Perhaps I need to look for some Aussies..recommendations anyone?
4. I got chased by a dog. Already. Day one of the plan and a freakin’ dog rushed me, bared teeth and growling and all, of course followed by the owner that ‘is so sorry’ because ‘he never acts like that’ and ‘I just had to go inside to get something and there’s normally no one around’. I did my most pained half-smile and said that the last time someone said that to me I got bitten by a dog. Not true AT ALL, but neither was her BS story so we’re even right? 😉

Here’s some awesome things about running:
1. A bit of early morning swagger…a bit of ‘I’m so awesome’ self-talk in the AM is good for the soul. Even that little run gives you a little pep in your step, and that’s no bad thing.
2. Sweet threads like these:

Why do awesome exercise clothes always make you feel much more competent at your chosen exercise? Ok, these tights are a tad ridiculous but I won’t get hit by a car that didn’t see me, right? Say hi to the Wonder Dog too, he’s a sensational photo lurker so expect to see him more.
3. Listening to super podcasts uninterrupted. Ahhh such a small pleasure! Today is was listening to Grantland pop culture podcast ‘The Right Reasons’ . It’s all about reality tv and is SO GOOD and so funny.

Tomorrow, I have personal training at the gym with D. D is his first initial, but I’m fairly certain it also stands for demon..devil..etc. He hurts me. Sadist. Hal says cross train, so cross train I will! I should also weigh in at some stage, in the interest of full and honest disclosure.

Let me tell you a little story about a girl. And by girl, I mean 30-something wife and mother of 1. She used to be a little size 8 in tip-top shape. She was really hangry all the time, but a size 8 she was.

Today, that girl (pssst..it’s me), now a size 12..probably 14..decided that size 8 is probably not going to happen again. BUT! Tip-top shape could happen again. Right?

So here’s what’s happening. I’m going to run the 12km at this years City to Surf. That’s in August. Easy!

Well, until I actually tried to run:

Not terribly inspiring. And FYI, there was a fair bit of walking in that ‘run’. That shit’s hard y’all! But you know, made the first steps..the journey starts somewhere..insert your own cliche as you will.

Anyhoo, this lil blog is going to be my diary, a place for reflections and maybe a training log. Not that I have any idea what I’m doing!

Be warned though, I talk a WHOLEEEE lot of crap. And I’ll probably talk about stuff I bought. Like my gal Carrie Bradshaw, I have a slight substance abuse problem called clothes. Hopefully when I’m running, I won’t be shopping!

I work in fashion retail which means the above claim is probably defunct. Meh. What can I say? I’m running aren’t I?!

Nice to meet y’all anyway! Stop by and say hi. Any advice is welcome.